New 50,000-square-metre facility in Hungary can produce 4,000 workstations and 1,000 servers per day, Lenovo claims Lenovo has promised partners more competitive pricing for its server and workstation products after opening its first-ever in-house manufacturing plant in Europe.Situated 25km southeast of Budapest in Üllo, Hungary, the facility - which is one of Lenovo's largest - spans 50,000 square meters across two buildings and three floors.The building has been fitted with solar panels with a capacity of 0.5 megawatts - or enough energy to power a small village, Lenovo claims.It was officially opened last week. The vendor hired 1,200 staff to run the facility, which Lenovo claims is able to produce around 1,000 servers and 4,000 workstations per day.That equates to around 240,000 servers and 960,000 workstations per year, Lenovo's EMEA president of ISG Giovanni Di Filippo told CRN.It is Lenovo's first-ever in-house facility on the continent and is one of Lenovo's 35 manufacturing plants globally across Mexico, Brazil, China, Argentina, India, Japan and the USA.Lenovo has previously partnered with third-party firm Flextronics to provide manufacturing capacity in Europe through an expanded partnership in 2009.Di Filippo described the plant as "in Europe and for Europe", claiming that the facility will mean more competitive pricing and faster time to market for European customers and partners.Hungary's location in the centre of Europe with access to major highways will mean Lenovo will no longer have to rely on aircraft or long-haul shipping to deliver products to European customers, Di Filippo added."We realized that, if we do this in-house, we will become much more competitive from a pricing perspective, which we can then pass forward to our customers. It's a significant advantage which we want to really utilise and stay really competitive in the market.""When we produce in Shenzhen [China], we need a lot of containers and ships - this is now all eliminated which will also give us a competitive advantage in regards to costs too."The cost of building and shipping server and PC products has shot up over recent years, claims Di Filippo, due to rising energy and shipping costs, component shortages and the devaluation of the Euro and pound versus the dollar."I call it the perfect storm. Today you have real logistic challenges. You don't have enough containers, you don't have enough ships and you don't have enough aircrafts. Over the last two years we've had a significant boom driven by the pandemic. Everybody wanted to have a three, four or five notebooks, while, on the infrastructure side, datacentres need to grow because workloads are growing."Meanwhile, Gartner said that the world's top 10 OEMs increased their chip spending by more than 25 per cent in 2021 as global supply shortages worsened, driving up selling prices for customers.Di Filippo said Lenovo believes chip supply will normalise to pre-pandemic levels by 2023, at which point partners and customers will have access to better pricing for Lenovo products thanks to the new European facility."Starting calendar year 2023, we believe that we will see a pre-pandemic situation. And then, of course, all the benefit we get as one of the largest producers on the planet, we can then give back to our partners and of course give back to our customers. But we still have to accept the reality of the situation for the next six or seven months, because demand is still very high," he said.PC vendors have been shuttering their overseas manufacturing facilities in recent years. Fujitsu closed its sole remaining facility in Europe in 2018 as it moved to centralise production in Japan, affecting some 1,500 employees.Meanwhile, Dell closed its plant in Limerick, Ireland in 2009, affecting some 1,900 workers, as it shifted production to its Polish facility and to third-party manufacturers.But Di Filippo said that Lenovo's strategy is the opposite - it plans to expand with more facilities globally as the vendor chases its goal of hitting $100bn in global revenue over the next three years.Lenovo finished its last fiscal year at $71.6bn, an increase of 18 per cent on the previous year."We are expanding - this is our latest expansion right now, but we are not stopping here," he said.Di Filippo added that Lenovo is already planning to expand its presence in Üllo by building an innovation centre and executive briefing centre alongside its new manufacturing operation.This is coupled with a commitment to add 12,000 new engineers to its R&D team over the next three years."EMEA became one of the largest geographies worldwide for Lenovo - by far - on the ISG side and on the IDG side. And we have a very clear intent to continue to grow at this accelerated space."We are making significant investments in human capital, in Lenovo 360, in our program initiatives so they're becoming richer and becoming more attractive and more profitable for our partners."We have invested on the manufacturing side, on the partner side, on the human capital side, we in order to really keep up with the growth expectations of the company." 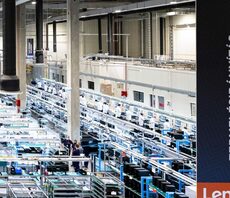